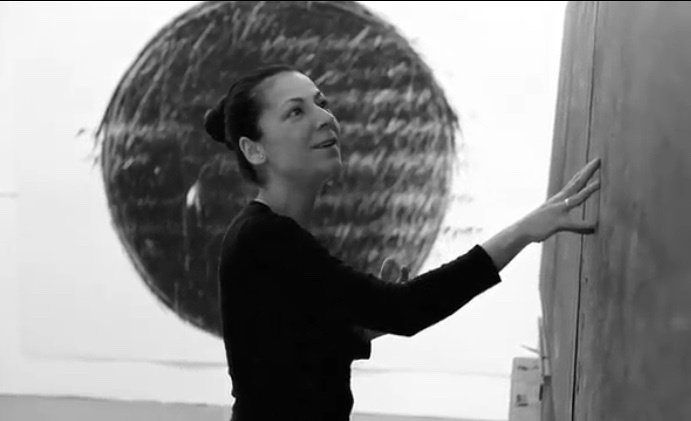 Her artistic journey started at an early age. Born in Skopje , Macedonia, after her studies she took up residencies and had solo shows in Paris, Berlin, Slovenia, Vienna, Nuremberg (Germany) and New York. After her first solo in New York in 2007, she has lived between Skopje and New York and continued to be active in the New York art scene and internationally. Her artwork has been featured in many magazines, newspaper articles, and museum and gallery catalogs world-wide. Maria participated in Venice Biennale 2019 invited by the European Cultural Centre, Art Basel Miami in 2014, represented by MANA, was awarded Citibank Artist of the Year - an Annual Solo Show at the 60th St/5th Ave. branch in NYC in 2011, also received Carole A. Feuerman Sculpture Foundation, NYC award for painting at the “Mixing Media” international show hosted by Carole A.  Feuerman Sculpture Foundation in 2015 and has been awarded 16 Arts grants throughout her career. Her studio residence has been at prestigious MANA Contemporary, a leading Contemporary Art Center in the New York City area since 2012. Her art, using the polar black and white colors, stands out with a specific expressive style that is unique, both in the Balkan region and on an international scale.

Her work has been selected for more than 20 exhibitions with different thematic, stylistic or topical cross-sections, aimed at representing Macedonian art in both domestic and foreign museums, such as the Museum of Contemporary Art Skopje and the Museum of the City of Skopje, the National Gallery of Macedonia, or the 107 Macedonian Artists in Cite des Arts in Paris, France organized by DLUM, as well as the thematic exhibitions in the the Gallery MC - NY.

She has had 6 solo exhibitions in different Macedonian museums, cultural and art centers, during different festivals and in galleries all over Macedonia: in the Museum of Contemporary Art, the Museum of the City of Skopje and the DLUM Gallery (Association of the Visual Artists of Macedonia) - Skopje, the cultural center ”Grigor Prlichev”- Ohrid during the Ohrid Summer Festival and in the National Gallery “Vangel Kodjoman” – Struga as part of the Struga Poetry Evenings festival.

She has participated in  Art Biennales and Art Festivals and Open Houses such as the Biennale for Young Artists at the Museum of Contemporary Art Skopje, Macedonia, the Biennale od Miniatures at the National Gallery of Serbia, at the Ohrid Summer Festival and the Struga Poetry Festival, Macedonia, at the OSTEN Biennale of Drawing Skopje, at the Sarajevo Winter Festival (Sarajevska Zima), Bosnia, and at the MANA Contemporary Museum Open Houses, the Bushwick Open Studios and the Juxtapoz Art Festival - NY, USA. She was also a participant in the prestigious Art Basel Miami, as the only Macedonian artist ever in its history, where she exhibited together with prestigious names such as Julian Schnabel, Marina Abramovic, Yigal Ozeri, Ray Smith, Sante d’Orazio, Carole Feuerman, Eugene Lemay, etc.

Some of her works are in prestigious private and public collections worldwide, including government institutions, embassies, museums, galleries and libraries.

Making note that the drawings are the predominant feature of Pavlovska’s opus, in 2015, the Drawing Room Gallery from New York, having realized three exhibitions by the artist, published a monograph on the occasion of her 10th anniversary, “Reaction/ Drawing Cycles 2005-2015” (Victory Hall Press NY) making Pavlovska part of their editions.

In 2019, Pavlovska published her Monograph The First Principle – the Drawing in Macedonian language, published by MAGOR Publishing House, Skopje, Macedonia. Her PhD thesis given in 2016 has been translated into Monograph : DRAWING as the foundation of art works of different artistic styles in various historical periods.

Her artistic journey started at an early age. She took up residencies in Paris, Slovenia, Vienna and Nuremberg. After her first solo in New York in 2007, she has lived between Skopje and New York and stayed active on the New York art scene. Her artwork has been featured in many prestigious magazines, newspaper articles, and museum and gallery catalogues worldwide.

Her work was selected and participated in the 50 Woman Artists Show: Body Boundaries/ Senses and Perceptions, 10 women International Exhibition (Carole Feuerman Foundation, NY) together with Yoko Ono, Cindy Sherman, Louise Bourgeois, Carole Feuerman among others at MANA Contemporary, opened in April 2018. The exhibition lasted for 6 months, until October 2018.

In 2019 she is invited for cooperation by the Legendary Master Printer Gary Lichtenstein / Silk Screen Editions, New York, and her work will be part of an edition of prints/ portfolios with her series od drawings produced and presented by the prestigious and unique Gary Lichtenstein.

Because of her international activity and authentic expression, Pavlovska has been invited to exhibit during the Venice Biennale 2019. Her project “A Reaction” has been selected and nominated - invited to showcase by the ECC Curators at ECC during the 58 Venice Biennale, at the prestigious Palazzo Mora, supported by ECC ( European Cultural Centre) and MANA Contemporary.

Her studio residence has been at MANA Contemporary, a leading Contemporary Art Center in the New York City area since 2012.

Hailing from a family of creative artists - her father is an esteemed painter, (the recipient of the National Order of Merit Award for the Arts 2011 and of title of the National Artist of Macedonia), her older sister is a leading Musicologist and her younger sister is an international classical Pianist - it is apparent that her artistic energy is ingrained within the very fabric of her being. Although a beneficiary of the distinguished cultural legacy of her family, Maria has achieved great recognition in her own right.

Critics have described her work as having "a strong personality" which "translates her topics of choice into pictorial language that demonstrates a quietly powerful eloquence". She has received praise from critics worldwide for her drawings and paintings that they describe as a battlefield, where light and darkness fight and the result is unpredictable. One sees the lightning bolts of ideas at work, as they are being worked out. This sort of simultaneous image ‘process/result’ dialectic lies frozen in space, stimulating the viewer to actively participate in the image creation themselves by way of investigation, inviting myriad readings within a given theme.

…”Critics describe her work with a special emphasis on her drawing as a "strong drawing", a "strong person" who translates her choice themes into pictorial language that shows a quiet - powerful eloquence ...

… In my opinion, Marija Pavlovska is one of the most expressive young artists in Macedonia. The way she translates her themes into the choice of pictorial language demonstrates the powerful eloquent and strong personality who will find his place on the Macedonian and extremely European cultural scene ...

… Her works express expressiveness with a combination of realism and interpretation of a mature, unique and strong person ... "

…”Pavlovska has been criticized for her work as works of art that "reflect her painting as a battlefield, where light and darkness fight and the result is unpredictable." We look at lightning from work ideas as they are developed. In this type of simultaneous image "process / result" the dialectic lies frozen in space, stimulating the viewer to actively participate in creating the linearity of the drawing and further the image through examination, inviting a huge number of readings on a particular topic "...

... "Her vivid images - made up of striking, non-existent moves - cover polar opposites: light and dark, full and empty, black and white '' ...

... "Maria's work carries the same intense, sincere, dedicated focus that is so evident in her personality. She has developed the ability to communicate deeply through a purely linear, gestural movement that composes her images. The emphatic energy of her artwork seems spontaneous, but is actually the result of thoughtful study, the creation of actions and responses that occur within the work over a period of time. A canvas or series of drawings can take months to be fully realized and carry that concentration of thought and action…

…As Maria continues to attract the attention of her fellow artists and curators and gallery owners in the New York area, she remains very faithful to her heritage, upbringing and her unique artistic direction '' ...

... '' I would explain Pavlovska's work as a drawing within a picture, and a picture within a drawing. In every work she uses oil, charcoal and pencil, which is simple but still delicate. Small scratch marks are visible on each piece, alluding to the primary, fragile condition, but it does not leave you indifferent. I describe this scratching as an unusual experience typical of this author; each result draws a once-hidden inner layer of the painting and exposes it to the viewer / world. In some pieces, these scratches and strokes turn into / in a script.

Working mainly in black and white, Pavlovska recently started a new red romance. For her, every picture is synonymous with poetry. Her awareness and intimacy in each piece is evident as if she were looking at an old friend, with a familiar history of the birth of each other, but still uncertainty and curiosity about where she is from.

Pavlovska's work is full of such stories, small secrets, which she translates into pictures. He often seems to convey extreme situations, both social and personal. Situations that leave us speechless and encourage her to document, write "...